12U Baseball Team Heads To Regionals With Help From Community 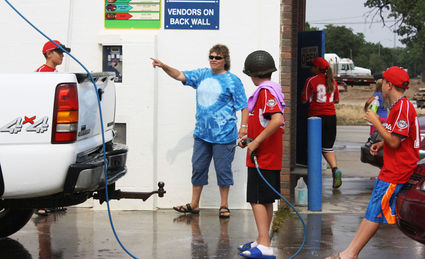 Quinn Robinson / For The Courier

Members of the Glasgow 12U baseball team receive instructions on the proper way to rinse and wash a vehicle during their fundraiser Saturday.

The community of Glasgow came out in full force over the weekend to help the Cal Ripken 12U team raise money for its trip to Kalispell this week to compete in the Pacific Northwest Regional Tournament.

When the money was all added up, the team amassed over $3,000 in funds, money that 12U head coach Mike Nieskens said is much appreciated.

"We had no expectations in the amount of money we were hoping to raise," Nieskens said. "Whatever we can get will help us out tremendously."

The team has to be in Kalispell by 2 p.m. today for the tournament that starts Thursday for them with a 11 a.m. game followed by a second game of the day that starts at 6:30 p.m.

"I think we have a great chance, our kids are on a high and doing very well," said Nieskens. "We're batting really well right now which is a rarity to see a team have that success at the plate."

In order to get that chance to showcase their capabilities on a bigger stage, the team partnered with Lawrence Carwash for their fundraiser.

"I received a phone call from the team asking how it worked to do a fundraiser at our car wash and we got the process started," said Candy Lagerqust. "We show them the proper way to wash a car and once we do that, we let them loose."

Lagerquist said that Lawrence Carwash has been helping with fundraisers like this since the company first started around thirty years ago and that the carwash takes pride in helping the community in fundraising events like this.

Nieskens said that the fundraiser is another way to bring the team closer together without having to step on the field.

"This is a big deal for them and having fundraisers like this is a great way to bring the team closer together to prepare for what's ahead at Regionals," Nieskens said. "I want them all to just realize it's a game, no different than any other game that they've played, it's just a different venue."