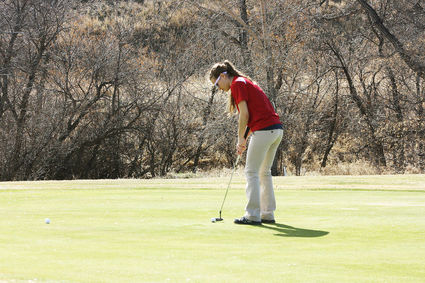 Quinn Robinson / For The Courier

The boys team edged out Malta by three strokes to take first in the event with a team score of 372. Luke Gunderson and Braden Barstad, Glasgow's two top golfers, scored an 83 and 97 respectively. The remaining three Scottie golfers, Wyatt Holzworth, Mikal Mavencamp and Kyle Humbert rounded out the varsity scoring with rounds of 89, 103 and 123 respectively.

Individually for the boys, Gunderson tied for first, but lost in a chip off. Holzworth came in fourth place in the event.

For the girls, Makkell Baillargeon had a round of 108. Tamrah Pewitt shot 117 on the day and Amy Nelson, in her first golf match ever, shot a respectable 140. Baillargeon and Pewitt placed second and fifth in the individual standings for the tournament.

Glasgow head coach Dave Riggin said that his team did all right for the tournament but would've liked to see his team shoot a little better as the season progresses.

"We're coming along, but I felt that we were probably a little off where we should be," said Riggin.

With the girls squad unable to compete as a team due to them not being able to field five members, Riggin said that he would like to see the play pick up in Baillargeon and Pewitt so they could qualify individually for State.

"She [Makkell] has played fairly steady, she's improving as we go along," Riggin said. "I'd like to see both of our returners to be in the low 100 range in scoring so they can compete in State at the end of the year."

The schedule for the Scotties in the next 10 days is a hectic one.

Glasgow will play in a match against Plentywood today. Friday, Glasgow will be at Harlem before traveling to Chinook on Saturday.

On May 7, Glasgow will return to the links at Malta to make up a match that was rained out last weekend before traveling to Shelby on May 9.

In today's match against Plentywood, Riggin is expecting his team to compete for the top spot.

"We should do well there," Riggin said. "It's a short course and we should win it if we play our game."