No Doubt, It's A Bull Market 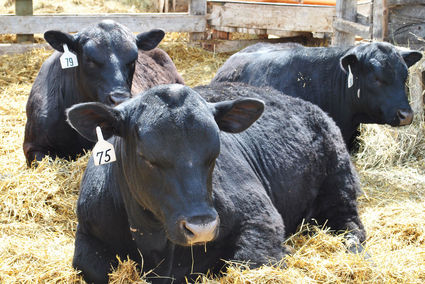 It's a good year to be a rancher. Bulls are selling at record prices this year. These bulls sold at the McRae's Dry Prairie Ranch sale on Thursday, April 17. The top bull sold for a possible record breaking $16,000 at the Glasgow Stockyards.

The bull sales have seen record prices at the Glasgow Stockyards. Beef prices are soaring and right now it's good to be in the cattle business.

In the month of April, at the Big Dry Angus Ranch bull sale, the McRaes of Jordan, sold a bull at possibly one of the highest prices ever seen locally. The top bull brought in $16,000. The top 10 bulls averaged at $9,825. The average for heifers was $1,410.

The top seller at the sale that took place on Thursday, April 17, went to Spring Cove Ranch, of Bliss, Idaho. Robert James Whiteside of Jordan, Dean Reddig of Frazer, and Donald Renner,of Larslan were the volume buyers during the event.

While these was clearly higher prices then for the other bull sales taking place at the Glasgow Stockyards this season, all of the averages have ranged from $3,500 to $6,000. Why are prices so high? A few factors nationwide may be helping raise those bids. Ranchers have been cutting back on the number of cattle in the last decade. The shortage, with increasing demands on U.S. beef, have been bringing home the bacon for those in the cattle industry.

According to statistics from the U.S. Department of Agriculture, the number of cattle in the U.S. is lower than it has been since the early 1950s. Heavy droughts have caused a lot of ranchers to cut back the number of cattle they have and the availability of grazing lands has caused some to sell off their herds.

The USDA reports that the long-term feed prices and stormy weather combined have also been factors of increasing prices. Exports for beef were up 4 percent in 2013 and are expected to increase again in 2014. Essentially the domestic beef market is barely keeping up with demands. In January of this year the cattle inventory was down 2 percent, totaling to 87.7 million head of cattle in calves in the U.S.

All these factors are bringing in big bucks for bulls. Cowboys are looking for different qualities in their bulls. No matter what they might be looking at, these bulls will bring future calves into local herds, which will most likely turn some decent profits for local ranchers.