By Samuel Knodel
For The Courier 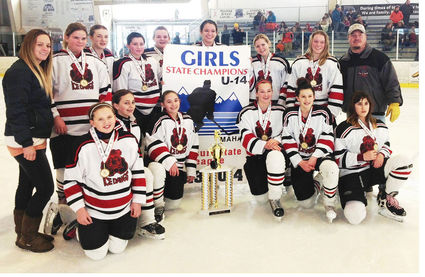 Jessica Pehlke / For The Courier

The U-14 girls hockey team celebrates with its championship trophy.

This past weekend was a huge success for the U-14 girls hockey team. Glasgow's road to the title started with an opening round game against Missoula.

Missoula came out swinging with a first period goal at only three minutes in. Glasgow returned the favor and then some scoring three goals in the period.

Kennedy Schmidt started the scoring off as she was assisted by Jesi Kennedy. Emily Kolstad had a nice unassisted goal of her own before Jesi got in on the scoring action with an assist from Schmidt.

The second period had Missoula scoring once again followed by a goal from Glasgow's Amy Lawrence with an assist by Madison Knodel.

Schmidt found the back of the net again for her second goal, followed by a second goal for Lawrence who was assisted by Bailee Holstein on the play. The final goal of the game came from Zoey Crater with Schmidt assisting as Glasgow went on to win the game 7-2.

The Flames played hard but Glasgow jumped out to an early lead and would never look back en route to a 16-0 victory. Baylie Chappell and Kennedy Schmidt led the way with a hat trick each for Glasgow.

The U-14 championship game was a rematch from Friday's first game against Missoula.

Glasgow's Jesi Kennedy scored first with an assist by Kennedy Schmidt. Missoula scored minutes later. Another first period goal from Glasgow's Lexie Pehlke by Rachel Billingsley and Bailee Holstein. Two more Glasgow goals in the second period from Kennedy Schmidt by Emily Kolstad and another by Rachel Billingsley by Jesi Kennedy and Maddy Uphaus. Two more third period goals from Missoula and a final third period Glasgow goal by Lexie Pehlke with an assist by Emily Kolstad secured the win and the championship for Glasgow as they won 5-3.

The Glasgow girls knew Missoula would be tough, but maintained a two goal lead for nearly the entire game. Missoula charged hard against Glasgow, but Glasgow was just too much on this day.

As before, the Glasgow team was lead to victory by coaches Ken Schmidt and Kaitlin Cusker.