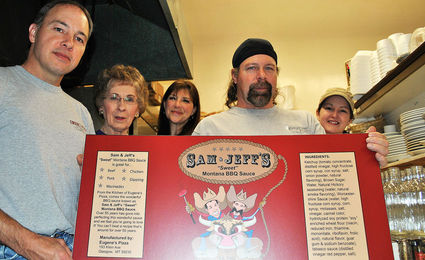 A business that just celebrated 50 years of business is about to take things to the next level. Co-owners Jeff and Sam Knodel of Eugene's Pizza have entered the bottling business.

The family barbecue sauce recipe that has been used since October 1962 is now in its own bottle, with its own label, and it will be sold to Glasgow customers and travelers who stop in. The brothers started putting their sauce in a bottle on Wednesday, Feb. 19. For now, the bottles will just be sold in their store, but there's a possibility to expanding distribution in the future.

Employee Mary Kate Tihista helped get the ball rolling with the licensing and paperwork involved to get the bottling of a local barbecue sauce through the state. She explained that she also had to help make a lot of phone calls to make it work. They named "Sam and Jeff's Sweet Montana Barbecue Sauce" different from the business, so that if someday they sell they can continue to bottle their product.

"When we had time we worked on it," Sam said.

The logo placed on the bottle was drawn by Donna Roness, who helped develop characters that look like Sam and Jeff on the bottle riding on a bull. One with a lasso, the other holding a branding iron. The saying, "Put some sweet on your meat," adds a little humor.

Sam explained that the sauce goes well with just about anything ,and the five stars on the logo is to help let people know that their product is made to a high quality.

"It took a few revisions before it came to life," Sam said.

They hope to continue the product and currently are shipping bottles from Washington to the store. Sam explained that the expenses add up when it comes to getting the product ready. Originally they shipped the bottles somewhere else for the product, but then they realized their kitchen was already licensed so they decided to bottle it here.

Sam also said that they have looked into franchising their business. They want to continue to keep it up the way it's been going for half a century, but they wouldn't mind expanding to other locations if the right people were willing to run one. While their hometown feel will continue, it seems that the business could be making small changes.

His mother and the previous owner for 25 years of the pizza shop, Mary Sue Knodel, explained that she has been behind the decision. The local shop is a local icon and many in the area will boast of their ribs, which are baked and flavored with the barbecue sauce. Sam explained that they have been providing jobs for around 30 employees, many in high school and involved in sports and other activities.

"We're committed to putting out good quality meals and we buy the best ingredients for our product," Sam said. "When something is right for the ingredients, we stick to it."

While their barbecue sauce is made at the store, they also make their own dough and other sauces and dressings. The burger patties are all made at the store. All that handmade product makes for a local flavor that's unique to them. Sam and Jeff took over the business in 1992.