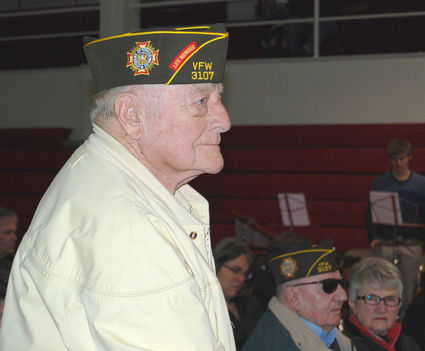 George Kolstad stands during the Glasgow High School Band's version of the Armed Forces Medley at the Veterans Day ceremony in Glasgow.

The annual Veterans Day ceremony at the Civic Center in Glasgow had an added feature this year. In addition to beautiful music, the VFW honor guard and a thoughtful speech, four World War II veterans who went on the Honor Flight to Washington, D.C., spoke about their experiences.

Joe Carson of Fort Peck was accompanied by his daughter, who chauffeured for him. He said he really enjoyed the trip, especially the changing of the guard at the Tomb of the Unknown Soldier. Maury Graham said they were received at Reagan National Airport and the Billings airport by lots of people and bands playing. He called it a humbling experience and he encouraged veterans to go.

Adeline Mitchell worked in Washington during the war. She said her son, Mike, pushed her to get the paperwork done to go on the Honor Flight. What she enjoyed most was the World War II Memorial.

Cap Holter couldn't get over the guards at the Tomb of the Unknown Soldier, who were nearly identical, and moved with such precision. He said everything about the trip was enjoyable, interesting and colorful. "We were treated like royalty," Holter said.

The front of the stage this year was lined with 42 photos from the VFW Hall, Valley County soldiers killed in action. The VFW only has pictures of about half of those who died in war.

Steve Page, who was in the Special Forces in Vietnam, had to gulp once or twice as he started his Veterans Day address, because he followed the EQ Singers' rendition of "The Ballad of the Green Berets." He traced some history, noting that during both major wars in the 20th century, the population of Montana was barely 500,000, yet more than 50,000 men and women entered the armed services, the highest per capita participation of any state. Montana also suffered the highest per capita casualties, he said.

He recalled the formation in 1894 of the First Montana Volunteers, which saw service in the Philippines and in WW I became the 163rd Infantry Regiment, filled mostly with men from northeast Montana. The 163rd was activated again in 1940 and fought for three years in the Pacific.

Cap Holter served in the 163rd. Page quoted him as saying, "It was a hell of a place to have to fight a war."

Page said planning is complete for a Northeast Montana Veterans Memorial Park in Fort Peck. Groundbreaking near the flagpole at the top of the parade ground in the center of the town is planned for March 2014. The central monument is designed to evoke the style of the powerhouses at the dam.

"This will be a magnificent portrayal of gratitude by all nine counties of northeast Montana," he said. "I ask your support."

For more information and to donate to the veterans memorial park in Fort Peck, visit http://www.VeteransMT.org. Lisa Olk is the executive secretary of the organization, 228-2223.

The Glasgow High School Band, under the direction of Brad Persinger, contributed patriotic music and a medley of the songs of armed services, during which veterans stood for the song of their branch of service.

Persinger and Leonard Swenson played the haunting echo version of "Taps" at the end of the ceremony.