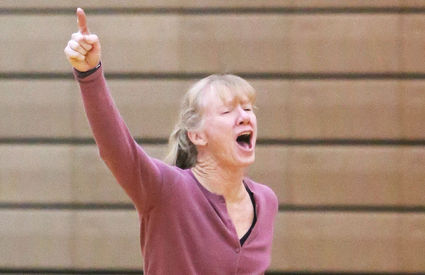 Donna Osksa / For The Courier

Coach Lori Dailey and her volleyball Scotties are heading to Malta. A Northern Division B championship is at stake.

Earning the title of conference champions was a goal the Scottie volleyball team had been striving to achieve all season. With just one loss on the season, the girls were indeed crowned champions and headed into the District 2-B Tournament with a first place seed.

Their first opponent was Wolf Point, a tough team that always puts the Scotties to the test in a long, tough contest – and this meeting was no exception.

The ever-strong Wolves battled and almost won the match in four games before the Scotties were able to gather themselves, take back a sizable Wolf Point lead and finish Game 4 with a win, forcing a fifth and deciding game. Finally the undersized but determined Scottie girls established themselves as a force, going on to win Game 5 soundly, 15-4.

The win over the Lady Wolves put the Scotties into the semifinals versus Plentywood. In a strong, organized fashion, Glasgow put away Plentywood in three straight games: 25-13, 25-19 and 25-11.

"I very rarely single out individual players because I feel so strongly about the team effort necessary to be successful, but Abby Dalbey had, in my opinion, the game of her life," Scottie coach Lori Daley said. "Everyone else contributed nicely and helped enable her success, but Abby was on fire and I was so proud."

That nice victory afforded the Scotties some rest as they awaited the championship match. Unfortunately, the down time turned out to be a double-edged sword as Glasgow never really got its feet under them in a quick four game loss to Plentywood – which made the "as needed" second championship match very much needed after all.

After just a short break, the Scotties banded together and attacked the Lady Wildcats from all sides, taking them by surprise in three quick games: 25-12, 25-17 and 25-23.

"I know we lost the first championship – Plentywood definitely outplayed us that time – but it's pretty hard to deny that we were ultimately the stronger team that day," Dailey said. "We were so balanced, offensively and defensively, almost everything went our way. I wish I knew how to bottle momentum!"

Two big hitters, Megan Dailey and Abby Dalbey, redoubled their efforts on defense, digging as well as two other solid back row players, Sage Sukut and Khloe Krumwiede. Megan led in kills, but Amy Breigenzer and Dana Hughes played out of their minds and really balanced out the attack while Sadie Sukut had some amazing, game-saving blocks.

Add in 33 assists from the ever-steady and clever JoLynn Reyling (who also racked up seven kills) steady passing and defense from Haylee Redfield and some much-needed aces from the back line at the hands of Mariah Stein, and you have proof of successful teamwork in action.

So an all-around effort turned into a district championship title for the Scottie volleyball team. Glasgow opens the Divisional Tournament with a match against fourth-ranked Cut Bank at 10 a.m. Thursday in the Malta High School gymnasium.