No Need For Small Ball 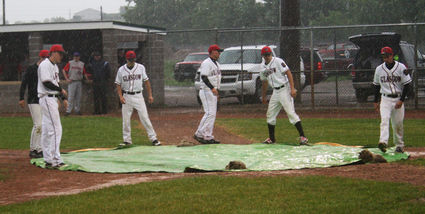 Reds players ran out to cover the field early in Tuesday’s contest with Sidney as a downpour began in the top of the second inning. Both scheduled games were postponed.

Glasgow’s bats were red-hot in a five-game tourney in Havre this weekend.

The Reds outscored their opponents 66-7, clubbing their way to a sweep of their Northstar Tournament opponents.

“Typically, in our program, we throw strikes, we play defense, we try to develop it to play close games because that’s typically the way we have to win,” said Head Coach Jack Sprague. “But the way we swung it this weekend, it was pretty much over early.”

The Reds opened the weekend with two games on Friday, throwing Jake Kolstad and Walt Dalbey in the double-header.

Kolstad threw a five-inning complete game, allowed three runs, one earned and struck out five Calgary hitters as the offense gave him a quick three-run lead to defend. Andy Gardner opened the scoring in the first inning with a one-run double, pushing Dalbey across. Dalbey scored one batter latter and then Gardner scored on Keil Krumwiede’s double.

The bats didn’t stop there. The Reds scored in every inning, including a solo shot by Tom Leland in the fourth, as they went on to an 11-3 victory, Kolstad’s first win of the season.

In the night cap, Dalbey rebounded from a rare poor outing his last time out and dominated for five innings against Swift Current.

“It was back to Walt,” said Sprague, addressing the difference between Dalbey’s first and most recent outings. “It was almost like, ‘boom, he’s back.’”

Dalbey only allowed two hits and one earned run while striking out five in the win to bring his season record to 1-1.

The Reds offense again backed their starter, scoring 10 runs in the first inning, and cruised to the 11-1 victory. Johnathon Koessl’s two-run triple, scoring Ryan Padden and Griffin Bengochea, was the catalyst in the first inning. Wacy Ortman, Grant Legare, Bengochea and Koessl all piled on with two RBIs each.

On Saturday, the Reds beat Strathmore 14-3, behind Krumwiede’s complete-game effort on the hill. Gardner provided much of the firepower at the plate, going 2-for-4 with two doubles, four RBIs and two runs. The win brought Krumwiede’s record to 2-0 in the young season.

Then, the Reds bested Ft. Macleod, 15-0, in the second game on Saturday. Jason Thibault took the rock this time around, throwing four shutout innings in the mercy-rule shortened contest. He only allowed one hit, walked two and whiffed four for his first win of the season, bringing his record to 1-1. Leland, Ortman and Legare all had two RBIs to lead the offensive attack.

Finally, on Sunday, the Reds cruised to another 15-0 mercy win, this time in three innings over Havre. Legare threw three innings for his first win, striking out six and only allowing a pair of hits.

The Reds racked up 15 runs on only nine hits, walking seven times and taking advantage of five Northstar errors. Krumwiede and Koessl each had two RBIs. 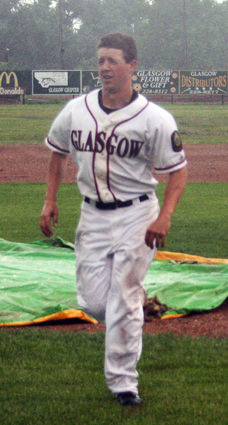 Andy Gardner comes off the field drenched after covering the field with the tarp.

“We just came out ready to play,” said Sprague. “Everybody attacked the ball. You could see the progression with everybody. We were just better than we were even two days prior.”

The tournament finished off a stretch of 13 games in eight days. Glasgow went 10-3 in those 13 games, including 5-3 in conference play after splitting both series against the Billings Blue Jays and the Billings Cardinals on Tuesday, June 4, and Wednesday, June 5.

Just two short days after the tournament, the Reds tried to get back on the field again on Tuesday, June 11, for a pair of games against Sidney. The weather decided not to cooperate, however, and both games were postponed.

The Reds travel to Sidney on Wednesday for another pair of games and then will play in the Aaron’s Tournament in Billings on Thursday through Sunday.