School Board Passes Bond, Makes Hires For Next Year; Mona Amundson Sworn In 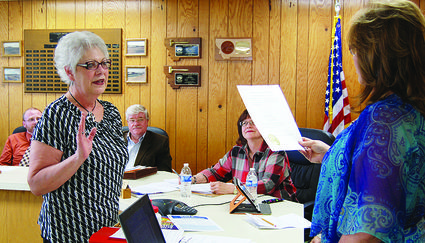 New Glasgow School Board trustee Mona Amundson, left, raises her hand to take the oath of office from board clerk Kelly Doornek. Behind her are trustees Nick Dirkes, David Irving and Alison Molvig.

The newest member of the Glasgow School Board, Mona Amundson, was sworn in at the May 15 meeting. Board Chairman Alison Molvig and Vice Chair Patt Etchart were re-elected to their offices and Kelly Doornek was re-appointed clerk of the board.

The board approved the contract with Hulteng CCM of Billings to act as the owner’s representative in the upcoming school construction and renovation project.

“I have high expectations of serving your community,” Eric Hulteng said. “I feel there is a good fit here with the personalities and the people we’ve met.”

The board discussed the public’s role now that the building project is entering the design phase. Connors said the Building Committee served its purpose well, and now the action moves to the board’s Facilities Committee. Trustee Patt Etchart said some members of the public on the Building Committee thought their role would go on to planning input. In the next phase, the design team will have a series of meetings with stakeholders, trustee Nick Dirkes said.

“It’s a work in progress,” said Hulteng. “A lot depends on the design team and how they work.”

A number of new teachers and the fall sport head coaches (all renewals) were hired for the next school year. All the teaching positions were filled as of May 15, according to Connors. All the classified staff were renewed.

Connors said there were a lot of openings to fill because of people retiring or moving. It is not a retention issue, a negative rumor based solely on the number of people leaving.

The nomination of Trevor Newman as head wrestling coach was tabled until the next meeting, when the winter coaches will be discussed. Brian Austin rose to speak for a group of people who are concerned about the hiring process for this position. When the hiring was tabled, about eight people left the meeting.

Connors said the district has come to an agreement in contract negotiations with the classified staff. Negotiations continue with the Glasgow Education Association for the certified staff and then with the administrators.

Kim Girard and Kristen Waarvik are developing a Foundations of Math program to fill in the gaps in some kids’ math education, so they will be ready for Algebra 1. Next year they may want to develop Math for the Trades, for students who study diesel mechanics, welding, etc.

The district enrollment is 826 students, 19 more than this time last year.

Retiring teachers were recognized at a joint GEA and School Board event on May 20 at the Elks. Connors commended GHS Principal Marj Markle, who retires this year.

“Marj is my little sister,” Connors said, carefully focusing his gaze elsewhere. “She has done a heck of a job here. It’s tough being the sibling’s boss. She made my life easier. She has 28 years in education. You don’t realize how lucky Glasgow was to have her. Her impact will resonate for years here.”

Glasgow High School graduation is this Sunday, May 26, at 3 p.m. in the gymnasium. The guest speaker will be Sam Knodel.

The next School Board meeting will be June 12 at 6 .m.