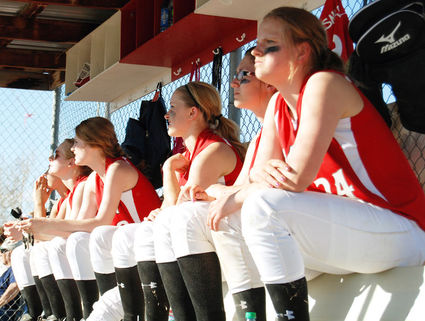 Scottie girls sit in their home dugout for the first time this season.

Finally playing in front of their town, friends and family, the Glasgow softball team put on a powerful display with an 18-15 win over Sidney on Tuesday.

Hundreds came out to see their dominant Scottie girls take on the Lady Eagles after several previous cancellations put any chance of a home contest in doubt. So when the Scottie girls were finally able to play at Sullivan Field, they were thrilled.

“They’ve been waiting for this all year,” said Head Coach Mark Falcon. “It’s good to have such a great turnout and so much support from everybody in the community.”

“It’s really nice to have all the support,” said Hickok.

Page added, “Having that big of a crowd come out for one game is really nice. We’re usually used to parents and the bus driver.”

The Scottie girls didn’t waste any time giving the crowd the show they have come to expect from the talented squad.

Sidney scored three in the top of the first as some Scottie girls may have had some nerves, according to Page and Hickok, who were both honored on senior night as the lone fourth-years on the team. But Glasgow responded with two runs in the first, three in the second and then broke the game open with nine runs in the third, all coming after two outs were recorded in the inning.

Sadie Sukut’s bases-clearing, three-run double scored the first blow for the Scottie girls. Mariah Stein followed with a two-run double of her own and then a pair of errors and a passed ball allowed four more runs to score to give Glasgow a 14-3 lead.

Sidney scratched back into the game, scoring three runs in the fourth, five in the fifth and four in the sixth, but the Scottie girls’ lead was never seriously threatened. 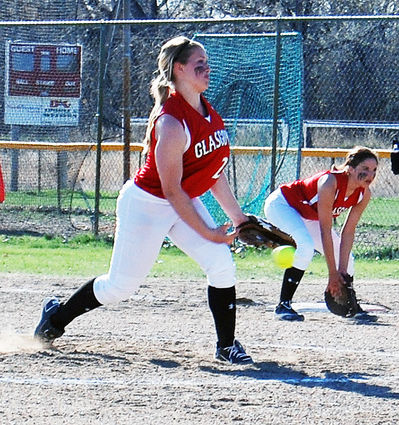 Shyla Bergtoll continued her winning streak on Tuesday against Sidney, her twelfth straight win in a decision.

Shyla Bergtoll earned the win, tossing 5.1 innings, allowing three earned and six walks and striking out eight. Bergtoll also recorded the save after Abby Mehling relieved Bergtoll in the fifth. Mehling tossed 1.2 innings before Bergtoll came back in for the save.

Stein and Sukut led the offensive attack. Stein was 2-for-3 at the dish with a double and five RBIs. Sukut was a perfect 3-for-3 and only a home run away from the cycle. She had three RBIs and scored three times.

The win came after a pair of wins in Havre on Saturday. The Scottie girls defeated Conrad 7-3 and then Shelby 8-7. Bergtoll earned the wins for both games, bringing her record to 12-1. Page had a team-high five RBIs in the double-header, going 3-for-7 at the plate with a double.

The Scottie girls travel to Lewistown on Friday and Saturday to face conference opponents Shepherd, Huntley Project and Colstrip for the second time this season. They will be the final tune ups for the Scottie girls before the divisional tournament in Columbus on May 17-18.